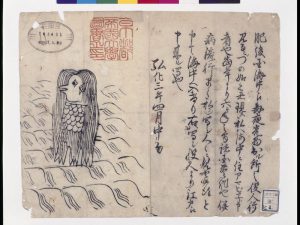 Close Encounter with an Amabie (Ep. 49)

An amabie is a Japanese yokai that is said to have predicted a plague and then encouraged people to share its image to protect them from that previously predicted plague. Or something like that.

The amabie has recently been re-remembered all over Japanese social media with people posting their own adorable depictions of that long-haired, beak-faced, three-footed creature and wishing the current plague (Covid-19) to go away.

Speculative fiction writer, long-term resident of Japan and Bram Stoker Award finalist Thersa Matsuura explores all that is weird from old Japan—strange superstitions, folktales, cultural oddities, and interesting language quirks. These are little treasures she digs up while doing research for her writing.

"Matsuura-san is amazing in her knowledge of the Japanese language, culture and mythology. I lived six years in Japan and learned much during my immersive experience, but I keep gaining more insight from her!"
Park UchiiTunes Review
"I think most podcasts I listen to can use a bit of cutting down. Uncanny Japan almost always leaves me wanting at least a few minutes more!"
joemuseiTunes Review
"I love listening to Uncanny Japan before I go to sleep. Thersa's soothing voice and background noise makes you feel like you're in the countryside of Japan hearing these stories yourself."
Kade StanfordiTunes Review
"I was hooked as soon as I listened to the first episode. I loved how she documented her experiences and listening to the old Japan ways. It felt like I was submerged in the culture."
Mojo_25iTunes Review
"Thersa must have the most soothing voice in the world. On top of that, the podcast is so thoughtfully and lovingly curated, you just can't wait for the next one to come out."
TheGreatScoopsiTunes Review
"I love hearing your insights and how you are vulnerable with your listeners by explaining situations where you learned the information. I think it's really wonderful."
japanfan1235iTunes Review
"My absolute favorite podcaster was Rich Pav of Herro Flom Japan fame, but he's completely disappeared. However, I've forgotten about his absence since I discovered Thersa. I'm totally and thoroughly smitten by her voice and the audio quality is second to none. I wish she'd put out a new episode every day; I could listen to her read the Tokyo Yellow Pages. Please support her on Patreon!"
HeavyItalianTotal Creeper on iTunes. We have a restraining order out on him.
"It can be hard to find firsthand information on Japanese folklore, traditions, an language for non-native speakers; this podcast presents a rare opportunity to learn about this endlessly fascinating country in a fun and easy way."
Draig-dw-iiTunes Review
"As someone who isn't usually interested in history podcasts but interested in Japanese culture, Thersa keeps me interested with well-researched topics that are different than you'd find on a travel channel. With the wonderful background sounds of her surroundings, it covers some dark content while keeping a calm feel to it."
xtaxorxiTunes Review
"Always such interesting stories and commentary! Thersa's calm and clear voice, audio quality and most importantly subject matter always make this podcast one of the highlights of my month."
Elle.f.HuntiTunes Review
"It's a camp-side presentation about the oh-so-interesting myths and legends of Japan that you just can't experience otherwise. Thersa takes us along and guides us through each tale, dotted by personal experience, adding just the right touches."
Sweet SpotiTunes Review
"My husband stumbled on Uncanny Japan and we cannot stop listening. We can't wait to talk to my husband's mom about it, since she was born and raised in Japan."
laerkiniTunes Review